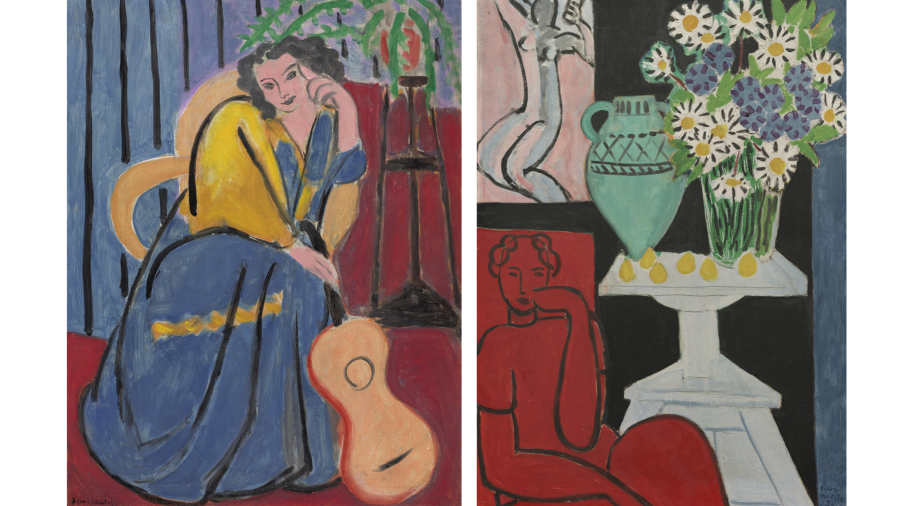 Afterlives at the Jewish Museum – how the looted paintings reappeared

Sign up for myFT Daily Digest to be the first to know about the latest in the visual arts.

In 1939, Henri Matisse painted two bubbling paintings that belied the darkness of the time. One depicts a woman wrapped in a voluminous blue dress and a golden shawl. She strokes a guitar as round and meaty as a ripe gourd, its rod-shaped neck and circular opening both lifeless and sexy. The other is an almost cubist glimpse of his studio, where the paintings lean against the wall and a burst of luminous daisies disturb the rectilinear composition.

A few months later, the Germans entered Paris and Matisse crouched down in his villa outside of Nice. Hitler knew his work well enough to have it banned in German museums, but the painter signed an oath attesting to his â€œAryanâ€ status so that he could continue to exhibit in France. These two luminous canvases, however, followed a more dramatic trajectory. Hidden in a Bordeaux bank vault by art dealer Paul Rosenberg before he fled to the United States, then unearthed by the Germans, they were sent to a huge art exchange center looted in Jeu de Paume in Paris. There they parted ways: Reich Marshal Hermann Goering seized â€œGirl in Yellow and Blue with Guitarâ€ for his personal collection; â€œDaisies,â€ the more formally daring of the two, remained out of sight.

Fortunately, both paintings resurfaced after the war: Rosenberg returned to collect them, then sell them. â€œDaisiesâ€ found its way to the Art Institute of Chicago in 1983 and â€œGirl in Yellow and Blueâ€ followed in 2007, so the siblings were reunited after 60 years of separation.

The story of two Matisses is one of the Jewish Museum’s many survival stories Afterlives: Recovering the Lost Stories of Looted Art At New York. It is not a show about how art is made, but how it is preserved and handed down from hand to hand. Material things are haunted by their accumulated history, acquiring emotional freight along the way. â€œObjects have always been transported, sold, bartered, stolen, recovered and lost. It’s the way you tell their stories that matters, â€observes Edmund de Waal in The hare with the amber eyes. The Jewish Museum presents these stories in dark, glittering detail.

The exhibition explores a paradox in the heart of Nazi darkness: how could those who revered certain products of civilization behave in such horribly uncivilized ways? The thugs who systematically exterminated entire populations have also deployed the same organizational prowess to collect, categorize, house and transport art. Hitler, the most famous failed artist in history, was obsessed with creating the ultimate museum in Linz, his hometown, as a cultural beacon of the Third Reich.

It was not a fleeting whim: the super-museum must have contained thousands of objects. He and his consiglieri engaged in endless discussions about how the building would be decorated and the paintings hung. American forces later discovered architectural renderings in his private library and a model was in his bunker complex when he committed suicide. He had also annotated albums – about twenty of them still exist – with photos of the art he dreamed of stealing (or that he already possessed).

The exhibition includes two of these works. “Act of Mercy: Give a Drink to the Thirsty”, a 1620s masterpiece by Italian Bernardo Strozzi, belonged to Viennese industrialist Oscar Bondy. When Germany annexed Austria in 1938, Hitler’s devoted body of looters took over the painting, which spent the war shuttling between secret warehouses. (The Allies later recovered it and returned it to Bondy’s widow, who auctioned it off in 1949.)

Claude Lorrain’s â€œBattle on a Bridgeâ€ (1655) was also on Hitler’s list in Linz. Rather than just snatch it up, the Germans forced Parisian gallery owner Georges Wildenstein to “sell” it to them for peanuts – even looting has its rules, it seems. The Allies later recovered it from a colossal art storage bunker deep in the Altaussee salt mines and returned it to Wildenstein. (It is now owned by the Virginia Museum of Fine Arts.)

In the popular imagination – and in the virtually all-male film starring George Clooney – the “Monuments Men” of the Allied Army were the heroes of WWII art, weaving their way through the lines. head-on to save masterpieces from the stake. The Jewish Museum, however, focuses on two women whose exploits were more sedentary but no less noble. Curator Rose Valland ran the Jeu de Paume sorting center, where she was both a collaborator and a spy. She used her bad temper as an invisibility cloak, kept her knowledge of German secrecy, and quietly followed each shipment. His thoroughness later proved crucial in restoring the stolen treasures.

The other scholarly superheroine of Beyond is Hannah Arendt, who worked with the Jewish Cultural Reconstruction Organization to collect and redistribute hundreds of thousands of orphaned books, scrolls and ceremonial items. It was a task akin to rebuilding a tree from its fallen leaves after a hurricane: slow, tedious and chimerical, but also desperate and urgent.

The lowering of the Iron Curtain made it even more difficult to recover the precious rarities of the decimated communities of Eastern Europe. In a document, Arendt warned that a 1680 Padua manuscript, a set of nine volumes of periodicals Der Jude (“The Jew”) of 1771 and an illustrated Passover Haggadah from 1740 was in danger of disappearing into the mouth of a vast black market. “It’s a pretty sad report,” she concludes – a rare flash of emotion in the midst of all the professional memoranda.

Arendt’s bureaucratic work isn’t much fun to browse in a gallery display case, but the museum has a bound selection of his field reports and correspondence that visitors can take home and leaf through at their leisure. (The brochure is part of a new work of art by Maria Eichhorn, which also includes audio recordings and a few recovered volumes.) Gradually, the poignant character of her dry prose emerges. Arendt is committed to responding to barbarism diligently, gluing together the fragments of a shattered culture. Her work is part of the story she tries to erase.

Whenever her organization distributed salvaged volumes to synagogues, libraries and schools, she included special bookplates to stick on the cover page. â€œIt will be very important to mark each volume,â€ she wrote, â€œso that present and future readers can remember those who once cherished them before they fell victim to the great Jewish catastrophe. So many millions had been branded with hate tattoos; Arendt wanted at least some of their old possessions to bear visible proof of love, care, and grief.