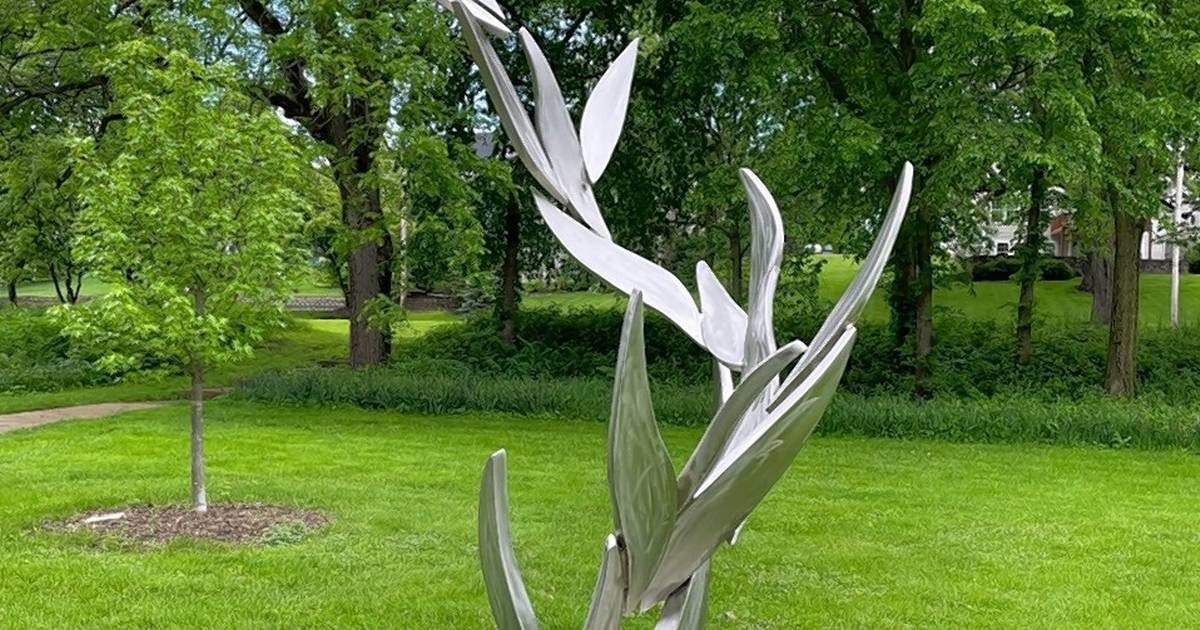 Michael Young’s interest in nature, particularly wind and flight, is a plus for visitors to the sculpture in the park exhibition this summer at Mount St. Mary Park in St. Charles.

Young, a sculptor with a studio in Old Town Chicago for 20 years, is participating in the St. Charles program for the first time and his stainless steel sculpture “Taking Flight” is an eye-catcher.

It is considered my favorite sculpture this year and marks about four of the five years I rate my favorites at Mount St. Mary as the exhibit opens to the public.

It might be fairer to say it’s “one of my favorites” because it’s always hard not to rate the lifelike sculptures of the late Seward Johnson, who again this year don’t disappoint. Her bronze sculpture “Search”, a woman on a bench rummaging through her purse, provides extraordinary detail – particularly in the purse – that once again amazes viewers.

The St. Charles Park District opened the 17th annual exhibit last month and will keep the 15 new sculptures on site through September.

“Artist friends told me about the St. Charles program, so this is my first time going,” said Young, who adds that he’s been “making art” since 1986. really is a beautiful park there.”

Due to its interest in birds and flight, the “Taking Flight” sculpture essentially takes this concept in a new form.

“It’s an abstract presentation of a flock of birds taking off,” he said. “All of these shapes are hollow and cut out of stainless steel, then welded all the way around, and all the welds have to be ground.”

Depending on what he’s working on, he noted that a sculpture like “Taking Flight” would typically take around three months.

The park has about 18 concrete pads used each year for the program’s temporary sculptures, and program director Sabrina Hunley said the park district accepts 15 or 16 each year. The sculptures that the park district could possibly keep are on display in various city parks.

“We have a committee of 10 to 12 people who meet in March to choose sculptures from submitted nominations, considering safety and what the community might like,” Hunley said.

Occasionally, the committee chooses a sculpture, but the sculptor backs out because he’s sold the piece or has already been accepted into another exhibit, Hunley said. “Then we go back to our list and choose another one,” she added.

Seward Johnson’s ‘Search’, a woman on a bench rummaging through her purse, is part of the Sculpture in the Park exhibit at Mount St. Mary Park, St. Charles.
– Courtesy of Dave Heun

The Sculpture in the Park program was created primarily to attract more visitors to the park. But that’s something the Park District has no way to measure for success.

“That’s the million dollar question,” Hunley said of the program’s power to attract visitors. “We’ve talked about it before, and we’re looking at website traffic, etc., but we have no way of really gauging how many people are coming for the carvings.”

The old-fashioned eyeball process tells me that Sculpture in the Park is a long-time winner. Mount St. Mary’s Park is a nice urban park to start with, and the sculptures along the walking path added more interest.

And, in some cases, they’ve probably made the park district feel comfortable saying visitor numbers are “soaring.”

Don’t let your guard down

It sounds simple, but most of us don’t: stay vigilant and don’t be lazy when protecting your digital assets, especially your personal information or payment credentials.

In data protection technology reports for the past decade for PaymentsSource, it was easy to see that Verizon’s annual data breach report was highly regarded among those in the protection field.

This year’s report touched on familiar issues. Wondering why supply chains are such a problem these days? Among various factors, supply chain breaches are a significant concern. Weaknesses in the supply chain led to 62% of system intrusion incidents in the past year.

Importantly, for the purposes of this column and possibly any small business owners who might see it, it’s important to remind everyone that the human element remains a big issue, as the report notes that 82% of breaches involved the theft of credentials, phishing, misuse or simple errors.

“Just because you’re a small business doesn’t mean you’re not a target,” said Julie Conroy, head of risk analysis and advice for Boston-based consulting firm Aite-Novarica. “In many cases, that means you’re a bigger target.”

The calculation is quite simple. Fraudsters using automated bots for logins or messaging can attack thousands of businesses and individuals in seconds.

“If you have remote access to your system, reset the password,” said Conroy, one of my top sources on the fraud topic. “Don’t leave it at the default password because that’s one of the things that always shows up in the breach report. People just don’t reset the password.”

“That’s the other very simple thing that always comes up in the report,” she added. “Small businesses can be way behind in updating things like antivirus.”

This advice is simple, but it requires some effort on the part of individuals. “Don’t use the same password,” Conroy warns. “If a site is hacked, criminals will use a bot to see where the password works.”

If I just pitched a tent near West Main Street and Randall Road in St. Charles, I could literally be the happy camper because three places that rank high on my fast food list are nearby. This would reduce the use of gasoline to get to those places.

For one thing, Beef Shack officials held their groundbreaking event last week to begin building the new home of the wonderful Cheezy Beef Sandwiches at 2015 W. Main St., on the southeast corner of Main and Randall.

Years ago this corner housed the Way’s Standard gas station, then a Title company.

And the newest entry to this tasty section of town is Chum’s Shrimp Shack, operating out of the old Beef Shack spot at 2115 W. Main St. I’ve talked about the shrimp sandwiches and other goodies at this spot.

And at 1825 W. Main St. we have Just Kabobs, a Greek restaurant with great food and generous portions. The last time I brought home a meal from Just Kabobs, it lasted me a few days.

Of course, there’s also a McDonald’s in the mix in this area, and this longtime fast-food giant has always had a few items that have caught my eye on occasion.

Exactly where my tent should go I’m not sure yet.

Don’t forget, the Fox Valley Arts Ramble takes place from 10 a.m. to 4 p.m. on Saturday, June 11, with various exhibits and events from Elgin to Aurora.

A map and information on all the great arts to see is available on the FoxRiverArts.com website.

All the hype and then staggering box office numbers for the new ‘Top Gun’ movie starring Tom Cruise signaled a strong start to the summer season for moviegoers – and theaters looking to pull in big numbers to make up for lost time in the last two years.

This sort of thing makes it harder to keep driving by the empty Randall 15 cinema complex in Batavia.

It looks like the new owners, Emagine Entertainment, are missing an opportunity here. But there were work trucks there, so it’s only a matter of time.

Earlier this year, when Emagine signed a lease for the former Goodrich Theaters site, company officials hoped to open the theater “one day” this year.

Perhaps we’ll return to Randall 15 before or during the holiday movie season?

Artist Colette Savage will demonstrate painting and pastels on Tuesday at GO ART!