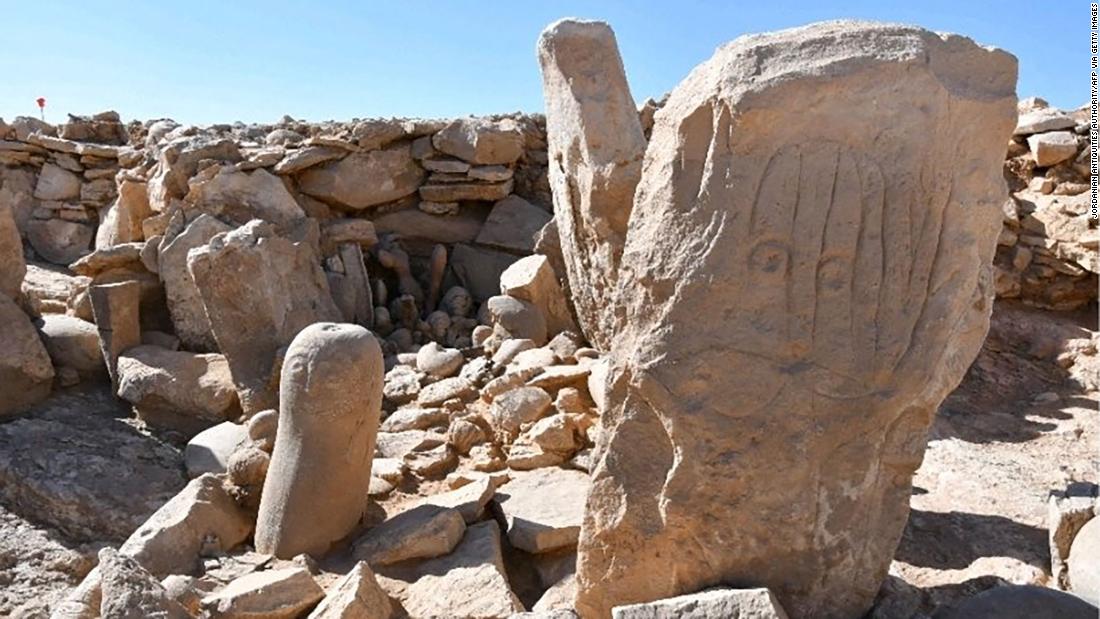 (CNN) — In a major new archaeological find, a Neolithic complex of 9,000-year-old stone carvings has been unearthed in the desert of southeastern Jordan.

The discovery was recorded by a team of Jordanian and French archaeologists and announced Tuesday at a press conference organized by the Jordanian Ministry of Tourism and Antiquities.

The site is believed to be a unique ritual facility dedicated to gazelle hunting and features gigantic stone traps known as ‘desert kites’, which researchers say are the oldest large-scale human sculptures. in the world.

Anthromorphic carvings are a rare glimpse into Neolithic spiritual expression.

This latest discovery was made in October 2021 by the South Eastern Badia Archaeological Project (SEBAP), led by Mohammad B. Tarawneh and Wael Abu-Azziza, who have been investigating the area for a decade.

‘Desert kite’ hunting traps consist of long stone walls that led prey to an enclosure in which they could be encircled, and were first discovered by the team in the Jibal area al-Khashabiyeh in 2013.

This then led to the discovery of campsites used by hunters whose lives centered around desert kites and catching game. The inhabitants lived in semi-subterranean circular huts, and pottery and animal bones have already been unearthed.

The announcement was made at a press conference by the Jordanian Ministry of Tourism and Antiquities.

Archaeologists say the new find provides insight into the creative and spiritual expressions of these ancient peoples. It consists of two stone sculptures, which have been named Ghassan and Abu Ghassan. The larger of the two, at 112 centimeters, has been sculpted with the depiction of a desert kite incorporated into a human figure, while the smaller, at 70 centimeters, has an intricately detailed human face.

Other finds include a ritual altar stone, a hearth, a carefully curated collection of some 150 marine fossils, as well as animal figurines and delicately executed flint objects.

“It is the only architectural model of this type known to date in the world in a Neolithic context”, specifies the SEBAP in a press release.

Desert campsites were used by Neolithic hunters who lived in circular huts.

These rare anthropomorphic sculptures are among the oldest artistic expressions in the Middle East, and the team say the altar and associated hearth suggest they were likely used for sacrificial offerings.

“The sacred symbolism and ritual performance highlighted was most likely devoted to invoking supernatural forces for successful hunts and an abundance of prey to capture,” says SEBAP. “It sheds a whole new light on the symbolism, the artistic expression as well as the spiritual culture of these hitherto unknown Neolithic populations. [who] specialized in mass hunting of gazelles using “desert kites”.

The oldest known temple in human history is Gobekli Tepe Complex in southeastern Anatolia, Turkey, and believed to have been built by hunter-gatherers. The 11,500-year-old stone structure was discovered by German archaeologist Dr Klaus Schmidt in 1994 and is older than Stonehenge.